All are invited to live stream Evelyn Lam’s DMA recital this Thursday, March 21st at 8 pm CST (9 pm EST). Mobile users, click through in your browser to view the live stream link, program, and invitation. Join us in celebrating Evelyn’s amazing musical achievements! 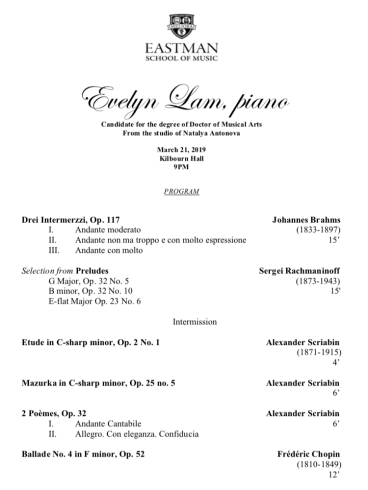 We’re excited to invite LHS musicians, families, and friends to the 2019 LHS Winter Showcase Concert on Sunday, February 24th, 2019 at 6:00PM in the Virtuosi of Houston Studio. We’re thrilled to welcome back pianist Evelyn Lam to collaborate with LHS young musicians. All are welcome to join us for a reception following the performances. See you there!

We’re thrilled to announce that Kids Aren’t Lazy: Developing Motivation & Talent Through Music is now available from Johnson String Instrument! It’s a huge honor to partner with Johnson String Instrument, one of the nation’s most respected sources for string instruments, sheet music, instrument repairs, and accessories. We’re excited to hear how JSI families pursue strategies from Kids Aren’t Lazy in their quests for musical excellence!

We’re so excited to remind you to tune in to Evelyn Lam’s Doctoral Degree Solo Recital, today at 7:00pm EST in Rochester, NY.

Evelyn Lam, B.M., M.M., will perform with LHS young musicians in our next studio recital on Saturday, December 9th, 2017 at 6PM at the Virtuosi of Houston Studio. 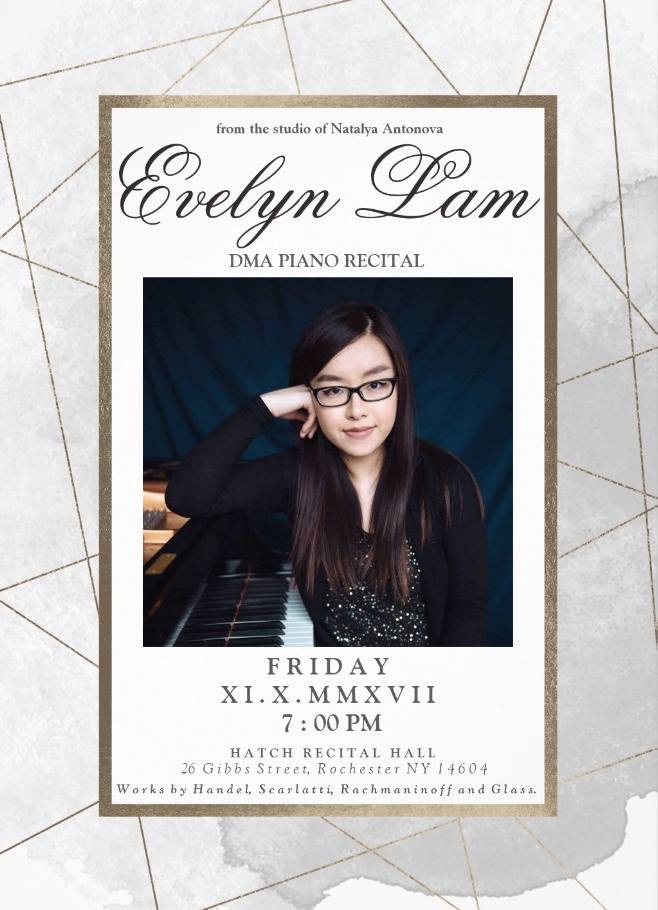 Lauren Haley Studios is thrilled to announce that LHS Collaborative Pianist Evelyn Lam has been selected as Teaching Assistant to Professor Natalya Antonova at the Eastman School of Music! Ms. Lam is pursuing her doctoral performance degree after completing both her B.M. and M.M. in Piano Performance at Eastman. Evelyn takes on this new teaching avenue in addition to her current teaching position (undergraduate piano class) at Eastman.

Ms. Lam will be available for a limited number of piano coaching sessions in Sugar Land and The Woodlands from February 8th – 13th. Interested LHS families must have their piano teacher’s permission before requesting a coaching spot. Arrangements for lessons with Ms. Lam can be made through Ms. Haley.

Ms. Lam and Ms. Haley are excited to invite you to their performance at the LHS Winter Recital on Saturday, February 13th at 5:30pm.

Born in Hong Kong, Evelyn Wing-Yan Lam started learning the piano at the age of 7. Her principal mentors include Natalya Antonova, Maxim Mogilevsky, and Wai Cheng. She also worked with Sergei Krivonos, Thomas Schumacher, Jean Barr, Elinor Freer, Sylvie Beaudette, and Ksenia Nosikova. In 2007, Evelyn achieved the Licentiate Diploma in piano performance with distinction from the Trinity College of Music, London. In 2009, Evelyn was admitted to the Eastman School of Music in Rochester NY, where she received a Bachelor degree in Piano Performance in 2013 and a Master of Music degree in 2015.

Before coming to the States in 2009, Evelyn won numerous prizes in the Hong Kong Schools Music Festivals, including 2 champions, three 2nd prizes, and other honors in the piano solo and duos division. In 2001, Evelyn participated in the 65th Steinway & Sons International Youth Piano Competition (Hong Kong Region), winning the fifth prize in the category of aged 10 below. She also achieved the Outstanding Award in the Mozart Piano Competition in 2003. In 2010, she received the Honors Chamber Award from the Eastman School of Music. In 2013, she received the Henry Cobos Endowed Piano Prize from the Eastman School of Music, for her exceptional achievement in the study and performance of piano. In the summer of 2014, Evelyn participated in the piano program at the Chautauqua Institution, where she was one of the 6 six finalists in the piano competition. She also received the second prize in the American Protégé International Competition in 2015, making her debut at the Weill Recital Hall at the Carnegie Hall in November 2015.Evelyn has also performed as a soloist with the Hong Kong Children Symphony Orchestra since 2008. She performed Beethoven Piano Concerto No.3, and Piano Concerto No.5 “Emperor”. In August 2010, she toured with the orchestra to China, performing the Yellow River Piano Concerto, conducted by Dr Yip Wai-Hong.

An active soloist and collaborative pianist, Evelyn has performed in many recitals near  Rochester, New York. She often gives outreach recitals in schools, senior homes, churches, and the George Eastman House. In 2015, Evelyn was appointed Collaborative Pianist for Lauren Haley Studios in Houston, Texas, where she performs with and mentors young musicians.

Evelyn is currently pursuing the Doctor of Musical Art in Piano Performance and Literature at the Eastman School of Music, where she studies with Natalya Antonova and serves as the studio assistant. She is also a recipient of the graduate teaching assistantship, teaching the undergraduate piano classes.

Lauren Haley Studios announces its affiliation with the Eastman School of Music in Rochester, NY. This affiliation brings on board pianist Evelyn Lam, an Eastman D.M.A. candidate, for recitals, collaborations, and lessons.

Evelyn will perform regularly with Ms. Haley as well as with LHS students in upcoming recitals beginning in February 2016.

Evelyn’s degrees include a B.M. and M.M. in Piano Performance from Eastman. Evelyn is also looking forward to her first Carnegie Hall performance on November 29th, 2015.